skip to main | skip to sidebar

I've been hiding in the shadows of blogland for, wow, almost 5 months. I think my reluctance to post came from my disappointment with this whole banding process. Things went so well from October 2009 - February 2010 and then everything just stopped. Up to that point I had lost 45lbs which was great but not amazing since I had done the same thing on Weight Watchers a few years back.

Then came the struggle with my port which resulted in a report in May. After the report, with no where near the same amount of fluid in my band I gained back several (read: 10) of the pounds that I had lost before all the damn port trouble. I was very angry, ashamed, and down right depressed. Here I had paid thousands of dollars (twice) to have this band and I had hardly anything to show for it.

I've struggled to be patient and get myself back up to pre-report restriction but come on did I really have to start this damn process over again? I just about lost my mind waiting and waiting to get back up to 7ccs in my 14cc band. Finally in August we reached that point and things started moving.

Cut to October 2, 2010 - my bandiversary. I had finally dropped those 10 lbs that I had gained during my port struggles, I went to a wedding wearing a cute dress that I bought at a regular store (still from the plus sized section but not from a plus sized store), my blood pressure was extremely better (117/72), my asthma was better, and overall I felt like things were moving in the right direction.

I've lost an additional 2 lbs in the past week which puts me almost 50lbs down since surgery and 101 lbs down since my highest weight (the day I gave birth to my son). I can honestly say that this past year has been a difficult one but I'm hoping this next year with the band proves to be a fantastic one. 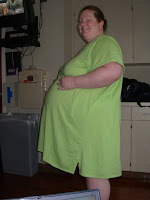 Nicole
I am a 34 year old mother of a handsome little red headed boy. I am a professional communicator for East Carolina University.